Norfolk Island is a fascinating place to visit. It’s a beautiful green island, with a wonderful coastline, friendly people and an amazing history involving Polynesian settlers, convicts and settlement by Pitcairn Islanders.

So it was with excitement and some nervousness that teams from Noosa Outrigger Canoe Club travelled to the island to compete in the annual NOC the Rock festival of outrigger paddling.

The event was established four years ago by the Norfolk Island Wa’a Outrigger Canoe Club and has developed quickly to become a big draw for teams from Australia and elsewhere. The event offers open ocean racing around the island, quoted as being 26km but in reality a bit further. In addition teams can paddle on other days to compete in a short course of 12km to Phillip Island and back, and a time trial event held inside the reef at Emily Bay over a distance of about 1km incorporating one turn.

The first race was the Round Island and as the men assembled in readiness to compete the heavens opened and a fierce thunderstorm with impressive lightning caused the race to be delayed. We were told this was the first time in living memory for many islanders to experience such an event. The men finally got into their canoes alongside the harbour wall where just the day before several 2-3m bronze whaler sharks were cruising to dine on scraps from filleted fish that the local fishermen threw into the water.

Then they were off, with crews in smooth waters racing for honours. Part way round the island the uniqueness of paddling in Norfolk was highlighted as the canoe course took the paddlers through a natural arch through the basalt rock formations. You couldn’t help but shout out to hear the echo.

Supporters drove from point to point around the island to cheer on the paddlers while others remained glued to the local radio station which was broadcasting regular updates on the race.

Next up were the mixed and women’s teams including a treasured man, Noosa’s very own Big Kahuna, Hughie Bingham, competing in his first overseas race, after paddling for more than 10 years. Even more special was that he was paddling with his daughter Jill who had hatched the plan to bring him to Norfolk Island. That is certainly special enough but Hughie is 85, yes, 85 years old. Paddling with these two to make up the ‘Hughie’s Mob’ crew were Warren White, Martina Gerdemann, Wendy Mabbott and steerer Des Mabbott.

By the time this race was underway the breeze had picked up and the crew were constantly urged to ‘lift’ to surf the small waves. They did this with aplomb and as result won line honours in a great time of 2h 33m 25 secs.  The team had gone to participate and go well but to be in the lead was beyond everyone’s expectations. Hughie defied his age and didn’t miss a beat. He is an absolute inspiration to his crew mates, his club mates and anyone who knows him. He became quite a celebrity on the island and was interviewed on radio and was hauled up to draw the tickets for the main raffle on the party night.

Next day the short 12km course was held, and the Meerkats and Beerkats men’s team was rearranged to include Brian Rogers, Glen Knoblauch, Don Smith, Greg Williams, Peter Whittington, steered by Ian Vivian. Another mixed crew, known as the ‘love boat’, consisted of couples Lyle and Graham Woods, Rhonda and Gary Hanlon and Mary Ann and Roger Chaffey.

Thankfully the next day was a rest day before the sprints in beautiful Emily Bay. First up were the V1 races where Des Mabbott managed to stay on course and win his heat.

Then into the sprints where more medals were won by the Noosa crews – and what lovely medals made, would you believe, from Norfolk Island Pine.

So our NOCC paddlers certainly returned home with many great memories and their timber medals to treasure. 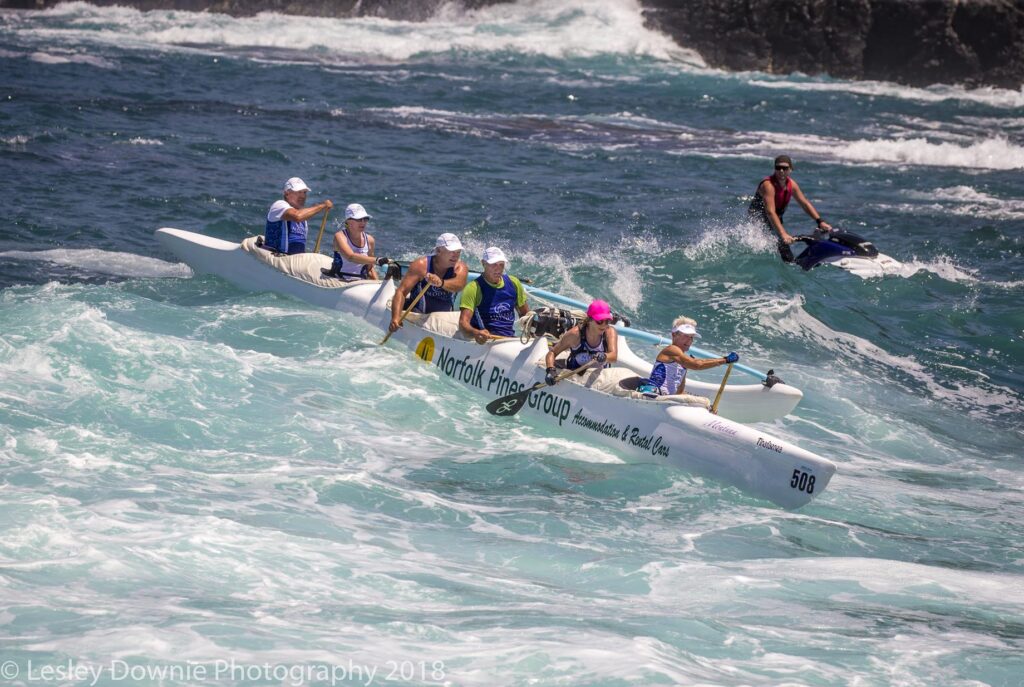