The Sydney Harbour Challenge was first held in 2014 and is the most iconic outrigger canoe race in Australia attracting teams from California, Hong Kong, Singapore, Hawaii and New Zealand, together with teams from all over Australia.

The challenging 22km course and spectacular scenic backdrop of the Harbour Bridge and Luna Park has seen the race expand year on year, and 2018 was no exception with the clear day adding to the spectacle.

Thanks to the good weather and organisation of the event by AOCRA (Australian Outrigger Canoe Racing Association), the first race for mixed crews started on time, just off Manly Cove.  Noosa was represented by a Master Mixed crew (40-50 years olds, even though the majority of the crew were much older than that), comprising Wendy and Des Mabbott, Greg Moore, Brian Rogers, Debbie Cormack and steered by Tina Standish. The team finished in 7th place out of 38 crews, in 1 hour and 57 minutes, and just missed out on a medal position in the Master division.

The second race was for the women’s divisions and competing in this race were Noosa’s Senior Master Women (50-60 years), consisting of Cath Mckee, Rose Edyvean, Jill Bingham, Tracey Sjogren, Tracey Horan, and steered by Stacey Phillis. There was also a Noosa Master Women’s crew (40-50 years), Jacqui Irving, Bernie Patterson, Lysette Van-Dooren, Kristen Brinkworth, Kerrie  Felsman, steered by Pascale Hegarty, and a Golden Master crew (over 60 years), with Rhonda Crockford, Dee Mooney, Ellie Sinclair, Sandy Kennedy, Jackie Barnes, steered by Chris Mitchell.  The wind had picked up a little which meant that the return leg was a bit of a slog, but the girls persevered and the Senior Master Women came home 2nd in their division (7th across the line) in 2 hours and 15 minutes.  The Master Women came 5th in their division in a time of 2 hours 28 minutes, and the Golden Master Women won their division in 2 hours 31 minutes.  As the girls got out of their canoes, smiles abounded – it was a good race.

The third and final race of the day was for the men with the Noosa Senior Master Men’s team consisting of Greg Williams, Chris Horan, Maurice Farrell, Peter Hoffenberg, Bob Hobart, steered by Rainer Hopf, representing their club well in what was a highly competitive division.  The wind was stronger still so their time of 2 hours and 2 minutes was very good and gained them 6th position in their division.

The races were livestreamed, and canoes were fitted with trackers, so that their friends and supporters could follow their teams on their phones, tablets etc., as they negotiated the course. Live streaming of all three races attracted an audience of more than 84,000 viewers worldwide!

All in all it is a great event and with such a wide domestic and international audience reached it is expected that the Sydney Harbour Challenge will continue to go from strength the strength.

Noosa crews next compete at Hervey Bay with 14 crews travelling North to compete in the fourth race of the South Queensland OC6 season. 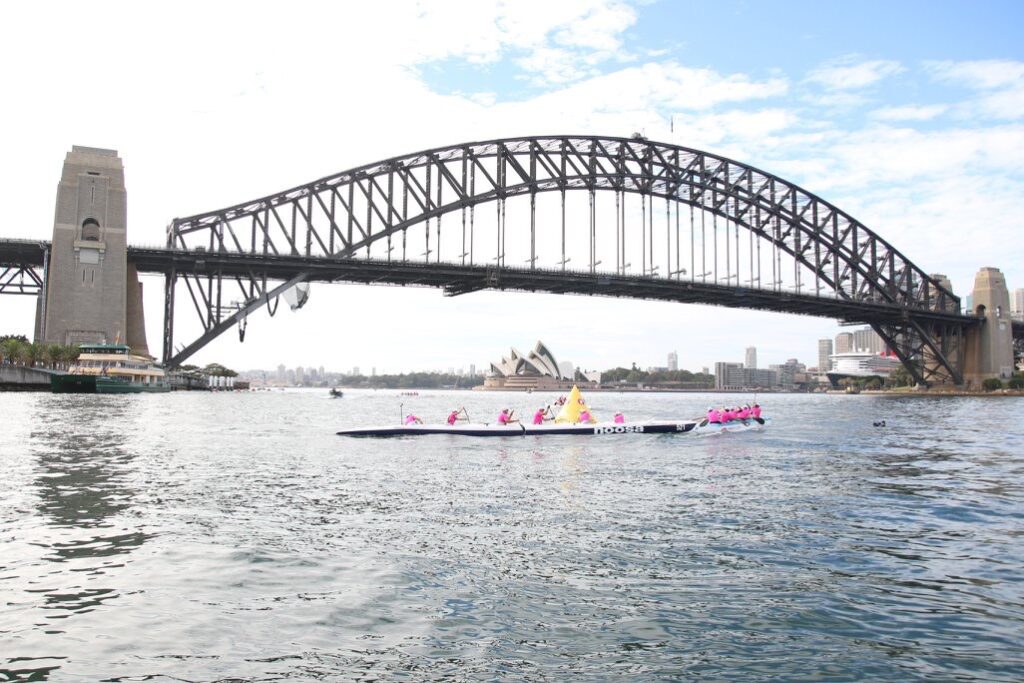